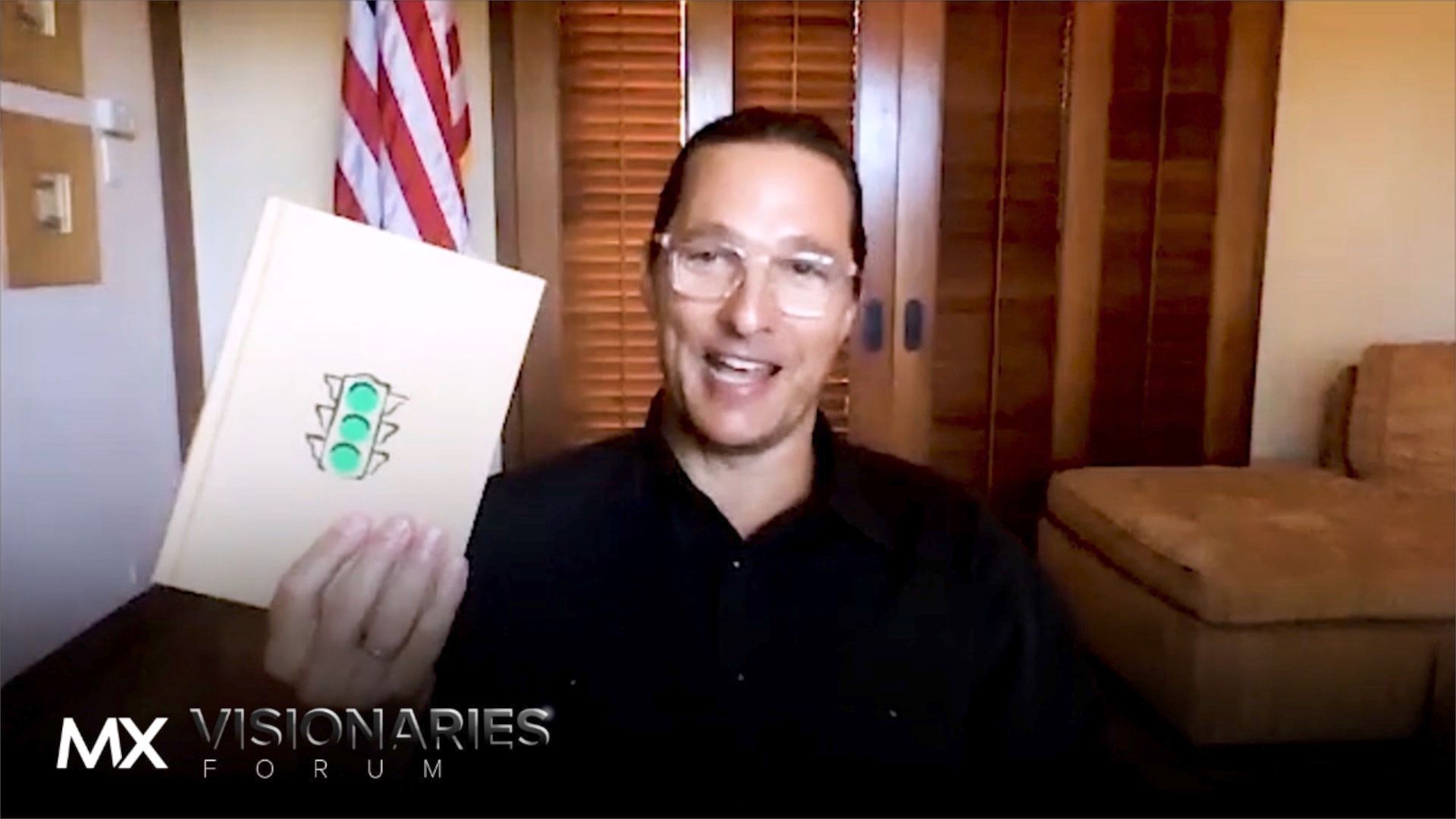 Actor, producer, and author Matthew McConaughey takes us on an inspirational journey as he explores themes and insights from his new book, Greenlights, in the MX Visionaries Forum.

McConaughey starts the conversation by diving deep into the title of his book and what the metaphor of greenlights means. Looking back through old journals, McConaughey found eight common categories, and in deconstructing them, he came up with the idea of greenlights. ”

He believes that “a greenlight is being kind to our future self. It’s things in our life that affirm our way, they say ‘go, proceed, more, please carry on.’ While yellow and red lights make us slow down in life — they can be crisis, hardship, intervention, interruption.”

He goes on to say, “The verb of the greenlight metaphor is really in the yellow light, meaning you have the choice to slow down and stop and let it become a red light, which sometimes we need to do in life when we need to have some introspection. But oftentimes, you see that yellow light and the choice is to put the pedal to the metal and don’t give that little crisis credit. It doesn't deserve your time. Maybe it was false drama that if we would have slowed down and stopped we would have been dwelling on it and turned that molehill into a mountain.”

Eventually, he says, “I found all the red and yellow lights in life revealed themselves to have at least a greenlight asset in the future. They have a lesson in them that we were supposed to learn. Any hardship, any pause we took, any intervention, interruption… they have greenlight assets that will be revealed to us later.” McConaughey adds, “Red and yellow lights eventually turn green in the rearview mirror.”

For a deeper dive into the discussion, here are seven main takeaways McConaughey shared about the lessons that success and failure taught him when it comes to living a more meaningful and purposeful life.

1. Create your own greenlights.

Sometimes you have to take charge and guide your own way. As McConaughey says, “I created a lot of the greenlights by taking responsibility today, which created freedom for me tomorrow. I made decisions today, and sometimes even sacrifices, that teed me up for more pleasure or more of what I wanted tomorrow.”

However, he also acknowledges that sometimes things just go your way. But even then, you have to take advantage of those moments. As he says, “Sometimes it was just good fortune, a greenlight landed in my lap and it has no rhyme or reason but I was going to do something with it.”

McConaughey believes that “we all have the feeling when we’re on frequency, when our relationships are going well — with our career, our selves, our God. We’re in the flow, we’re not going too fast, we’re in the flow of traffic, in our lane in our zone. What we give out to the world is what is returned to us. But that doesn't last forever and we get in a rut, and we’re off frequency.” One way to get back in line, he says, is not to “put the pressure on what you want, just get rid of the stuff that we know isn't feeding our true selves by process of elimination — those people, places, things, habits that give us a proverbial hangover the next day.”

He goes on to say that defining who you’re not is key to finding out who you are. He says, “If you get rid of enough things that don't feed you, aren’t giving you residuals, or teeing up green lights in your future, by sheer mathematics, you'll have more options in front of you that do feed your true self and will feed the greenlights in your future.”

Life will always have an element of risk to it. But McConaughey believes that “the art of living is what we do in the intersection of the yellow light.” He goes on to explain that, “A lot of times the risk is ‘No, I'm not going to give that crisis credit. I'm going to speed up and blow by it.’ But also, a lot of times it’s the greater risk and the more valuable risk to see the yellow light and go ‘This is a sign, I'm going to slow down and stop here.’”

He goes on to give an example from his own career. He says, “I had a time in my career where I was the romantic comedy guy. I wanted to do some dramatic roles, but those were not being offered. Well, because I couldn't do what I wanted to do, I decided to stop doing what I was doing. So I saw a yellow light and instead of saying. ‘Well forget it I'm just going to keep doing what I'm doing,’ I said, ‘No, I'm going to stop and remove myself from Hollywood.’ It ended up being a 20-month hiatus. By pulling over and planting myself at a red light, I actually ended up being forgotten. But all the sudden, 20 months later, I became a new good idea for those kinds of roles that I wanted and wasn't being offered before.”

Essentially he says, “I went through an unbranding phase to then rebrand. Again, process of elimination. I wasn't able to do or become what I wanted to become, but I did choose to say, ‘Well, I'm going to stop doing what I've been doing.’” In essence, the lesson here is focus on who and what you want to become and remove everything that isn’t adding to it, even if the road seems uncertain.

Everything you want to accomplish is within your reach; you just have to find a way to get there. McConaughey says, “Growing up, can’t was considered a bad word. You got in trouble for using it.” He says, “The lesson being: You may be having trouble, but don't say you can't. If you’re unable to do it yourself, you can seek help from someone else to give you the solution, so that doesn’t mean you couldn’t.” In other words, don’t limit yourself, be resourceful, look around you, and when needed ask for help.

Everything is possible and real, if you just stop thinking it’s unbelievable. McConaughey believes that the word unbelievable is condescending. He says, “We say it for things of great awe and great wonder. A great feat. A dynamic move. A sunset. A great play.” But why is it unbelievable, he asks, when “you just saw it or witnessed it? Give it credit, believe in that awe inspiring thing” He goes on to say, “We also say unbelievable for great tragedies, or when people do something that was unexpected or a screw up. But people do ‘unbelievable’ things all the time, so it’s high time you stop thinking it’s unbelievable. If you can depend on one thing, it’s that people will be people.”

When it comes down to it, McConaughey says, “it’s about being less impressed and more involved. You're usually overly impressed or astounded or ignorant. Instead, “Let's get involved and recognize [these things] as real possibilities.”

It’s better to be prepared and ready, than to always get what we want right away. McConaughey says, “Preparation does tee us up for delayed gratification, so we avoid that Sunday night stress about what we have to do on Monday morning. It's about having a long view. In all of our decisions as adults, we’re so into immediate gratification. Let’s think about ROI, what’s the decision right now? Sometimes it might be to sacrifice now so I can get more of what I want tomorrow.”

He goes on to say, “If you can project into your future, tomorrow, next week,10 years from now, before you make these decisions, have a little chat with yourself and ask, ‘What does my future self think about the decision I'm making now?’ Our future is a compounding asset. The decisions we're making are part of that compound. As we’re writing the story and making the investments, understand that every decision will have a consequence.”

McConaughey believes that gratitude is essential for living a good life. But he says, “We have to be more than just thankful. We have to be more than just happy to be here. But we can be really happy to be here and that doesn’t deny our ambition to want more. It actually can give us a safe haven for which to pounce on those things that we want more of. To be ambitious and be more involved. We're ambitious, we want to achieve, we want to grow. But [it’s important to] understand what’s around us, the obvious things that we shouldn't take for granted.”

Simply put, he says, “We can choose to want the extra zero at the expense of the quality of our soul’s account.” But he goes on to say, “There’s a choice [that can] fill our bank account and soul account. The ultimate pursuit is what are the decisions that are best for me that are also the best for we. That’s the spot, the place where you consider your immediate self [and things that are good for your present and future], but also what can please the most amount of people for the most amount of time. The most qualitative choice can be the most quantitative choice. All that matters is what we call quantity and what we defy as success. What is our currency? It’s more than a green bag. The most responsible choice is the one that will grant us the most freedom. There’s a reciprocity in it. When we quit contradicting things and see them as feeding each other and revealing more of each other — that’s the honeyhole.”

Perhaps one of the biggest lessons from McConaughey’s discussion is that “there's a way to catch and create greenlights for ourselves and others at the same time.”