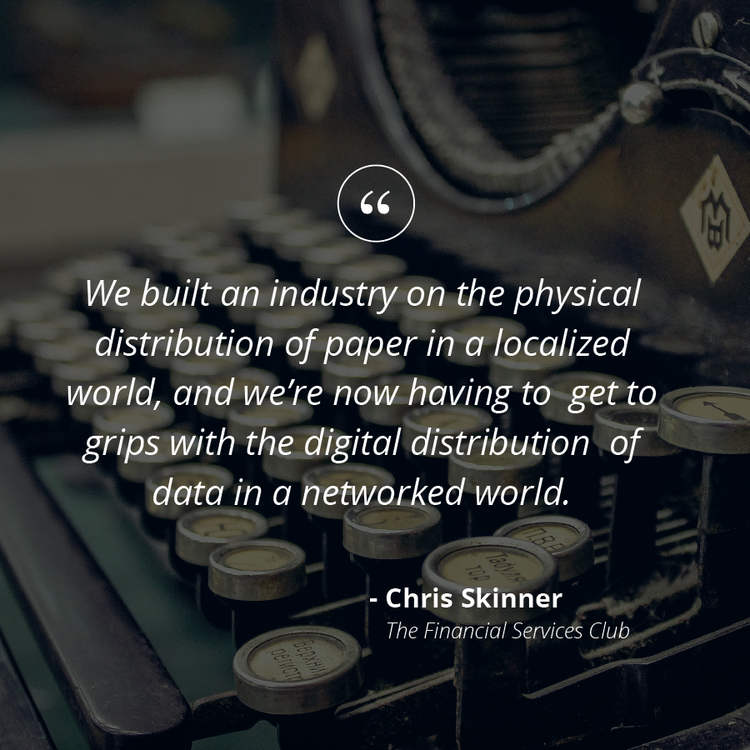 A Guide For Bankers in Tumultuous Times

Last week the chairman of Lloyd’s Banking Group warned that the financial industry will see more changes in the next 10 years than it has seen in the last 200 years.

That claim should worry bankers. If it’s true, how should bankers prepare for such a shift? And what will the changes mean for their bank?

Chris Skinner addresses such questions in his book Digital Bank: Strategies to Launch or Become a Digital Bank. The book outlines the changes banks face and what bankers should do about it. It's a how-to guide for the age of digital banking.

This is the shift that has taken place today. It’s why the chairman of Lloyd’s Banking Group can make such a bold claim about the future of banking. The core of banking is in flux.

To Become a Digital Bank, Cannibalize Your Organization

Most bankers probably agree that change is inevitable. What they might not see, however, is how to make the transition to become a digital bank. To this end, Skinner gives a painful (though honest) answer. He says, “The only way to do this is to cannibalise the organisation and create friction within the bank.”

Steve Jobs highlighted this same idea when he said, “If anybody's going to make our products obsolete, I want it to be us.” Just as the iPhone has cannibalized the iPod, mobile banking is set to cannibalize other channels.

Forward-thinking bankers recognize this and embrace it. They're willing to adopt digital solutions and keep their customer base, even if it means that some customers are less likely to visit the branch as a result.

Another major argument of Digital Bank is that a truly digital bank negates the need for the phrase “omnichannel banking.” Skinner says that “banks should stop thinking of channels and just recognize that they are digital enabled. Call centres, ATMs, the branch, Internet, mobile … everything is digital enabled.”

To a degree, it’s a point well taken. Once a bank is totally digital at its core, there won’t be fractured channels, each with their own set of information. There will just be the channel — the bank — and account holders can access that single channel through their various devices.

However, until banks can implement a fully seamless digital core, the term “omnichannel” has meaning. This point surfaces when Skinner talks about a customer who inquires about a mortgage through various channels. He says, “the bank needs to recognise that as the customer moves through those channels, all the information … is carried across consistently through those channels.” In other words, the bank needs to adopt omnichannel banking.

Perhaps it’s a matter of semantics, but it seems as though until banks arrive at the ideal Skinner mentions — a seamless digital core — the word “omnichannel” still has meaning. Either way, the ultimate goal is to create a single, cohesive banking experience.

He says, “From a purely social networking viewpoint, banks need to focus on methods they can use to become friends with their participants in their networks. Friends advise and support, they don’t sell, charge, or make money out of you.” [italics added]

Many traditional banks still think that friendly staff and free candy at a branch equates to good customer service. But if millennials are about 30 times more likely to visit a bank’s online presence than to visit a branch, what good is a friendly teller? Customer service in the digital age lies in figuring out a solid social media strategy. That's where the customers are, after all.

And yet that’s how many banks currently operate. “The silo divisions of banks,” says Skinner, “mean that they ignore their greatest competitive advantage—data.”

To overcome this problem banks need to be certain to create a seamless experience for account holders and then leverage that data to best please their users. Skinner adds, “It is the information value the bank adds in advising me on my financial behaviours that will really lock customers like me in.”

Chris Skinner ends Digital Bank by talking about three specific things he would do if he were building his own digital bank today. I won’t give away the ending here (Money Summit is a spoiler-free publication), but I will mention one more idea from the book that stuck out to me.

Skinner says that turning a bank around is like turning a supertanker around. The ships have to be careful not to turn 180 degrees quickly “as they will flip over and sink.” As a result, every turn requires “fourteen turns of the wheel.” Changing a bank can often seem just as strenuous.

However, because change is coming so quickly (for instance, Skinner shows that non-bank providers now handle more than 15 percent of all payments — “up from virtually zero 10 years ago”),  Skinner’s proposal is for banks to collaborate with quick-moving startups going forward.

By partnering with fintech startups, banks will give their account holders the right measure of security and speed. Account holders can know that their money is safe, and they can enjoy the latest financial technology. This is the way to become a digital bank.