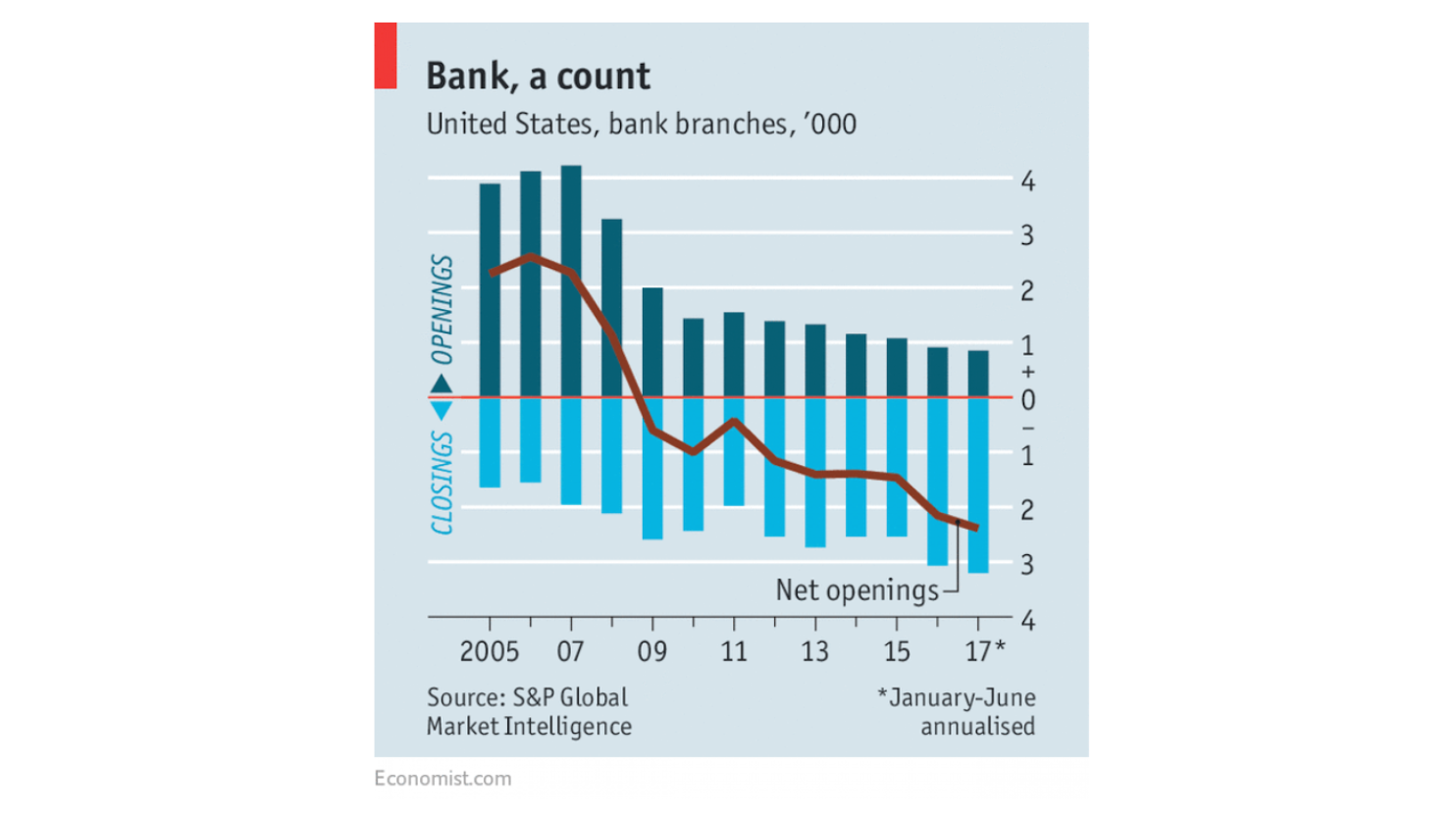 Get up to date in less than 5 minutes

See the top banking headlines during the last week brought to you by MX, a fintech company that enables you to collect, enhance, present, and act on data.
Let's start with a look at how quickly total valuations of banks and fintech companies have shifted. 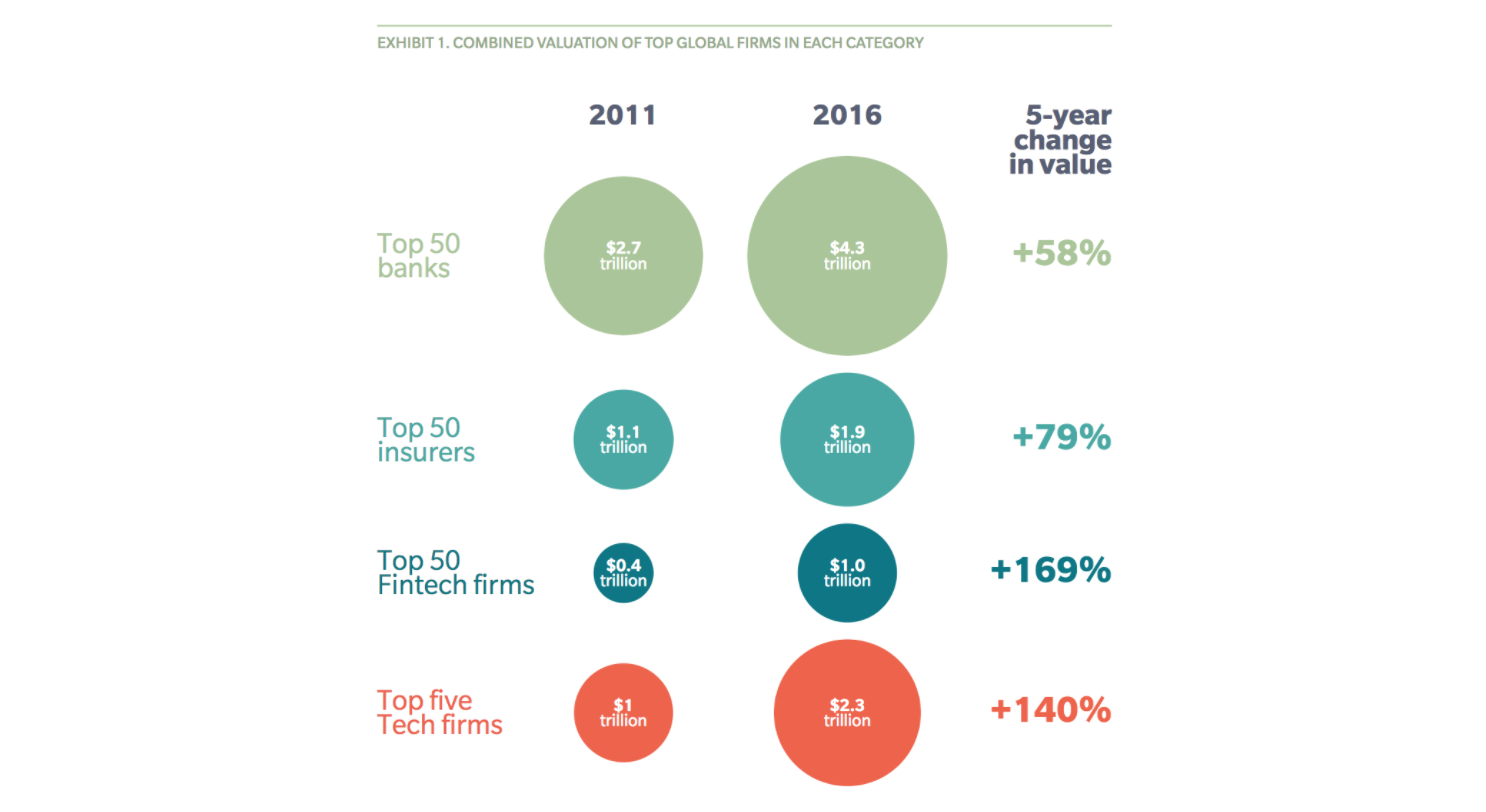 In their report 'State of the Financial Services Industry 2017,' Oliver Wyman shows that the valuation of fintech firms have exploded in unprecedented ways, signaling that the shift to digital is more urgent than ever.

The Number of Bank Branches Plummets

The Economist shows that financial institutions have closed more than 10,000 branches since the financial crisis. This places strain on account holders who live far from cities and further shows the importance of having a solid digital offering.

Read more from the Economist

FI Navigator: Banks that offer PFM have twice the enrollment in mobile banking

Fintech forces the fate of US financials

“Established corporations with large branch and sales networks have been challenged, as technology changes the way people use their products. JPMorgan Chase, Bank of America and Wells Fargo, for example, are all reporting double-digit annual growth rates in the take-up of mobile banking services.”

How Two Brothers Turned Seven Lines of Code Into a $9.2 Billion Startup

“[Stripe] handles tens of billions of dollars in internet transactions annually, making money by charging a small fee on each one. Half of Americans who bought something online in the past year did so, probably unknowingly, via Stripe. This has given it a $9.2 billion valuation, several times larger than those of its nearest competitors, and made Patrick, 28, and John, 26, two of the world’s youngest billionaires.”

“To master and manage this new process, banks and Financial Services organisations need to focus on the customer above anything else. Only organisations that will manage to quickly create a reliable partner ecosystem with the customer at its centre will be able to reap the spoils of this new revenue stream.”

Read more at IT ProPortal

“Bitcoin cash, the new alternative cryptocurrency, is crashing. Bitcoin cash has dropped 33% to $290 a coin over the last 24 hours, according to data from Coinmarketcap.com. That's down from its all-time high of $727 set on Wednesday, a day after its debut.”

Advanced Analytics And The Future of Digital Lending

“To be a digital lender, banks and credit unions must do more than provide a digital app. Internal lending processes must be transformed to eliminate friction and unneeded steps, with advanced analytics supporting proactive loan decisions.”

Too Many Fintechs, Too Little Time for OCC

“The Office of Comptroller of the Currency, which held office hours through its Office of Innovation in New York last week, might be in over its head. The office received a large volume of meeting requests, but could conduct meetings with only a fraction of those applicants.”

Big banks are going after Venmo and Venmo is winning

“Paper cash started replacing precious metals many, many centuries ago. However, it took PayPal’s Venmo (PYPL) just eight years to supplant cash for millions of people—largely millennials—looking to pay each other for things or split a restaurant tab.”