Will Banks and Fintechs Create the Experiences Needed for the New Normal? 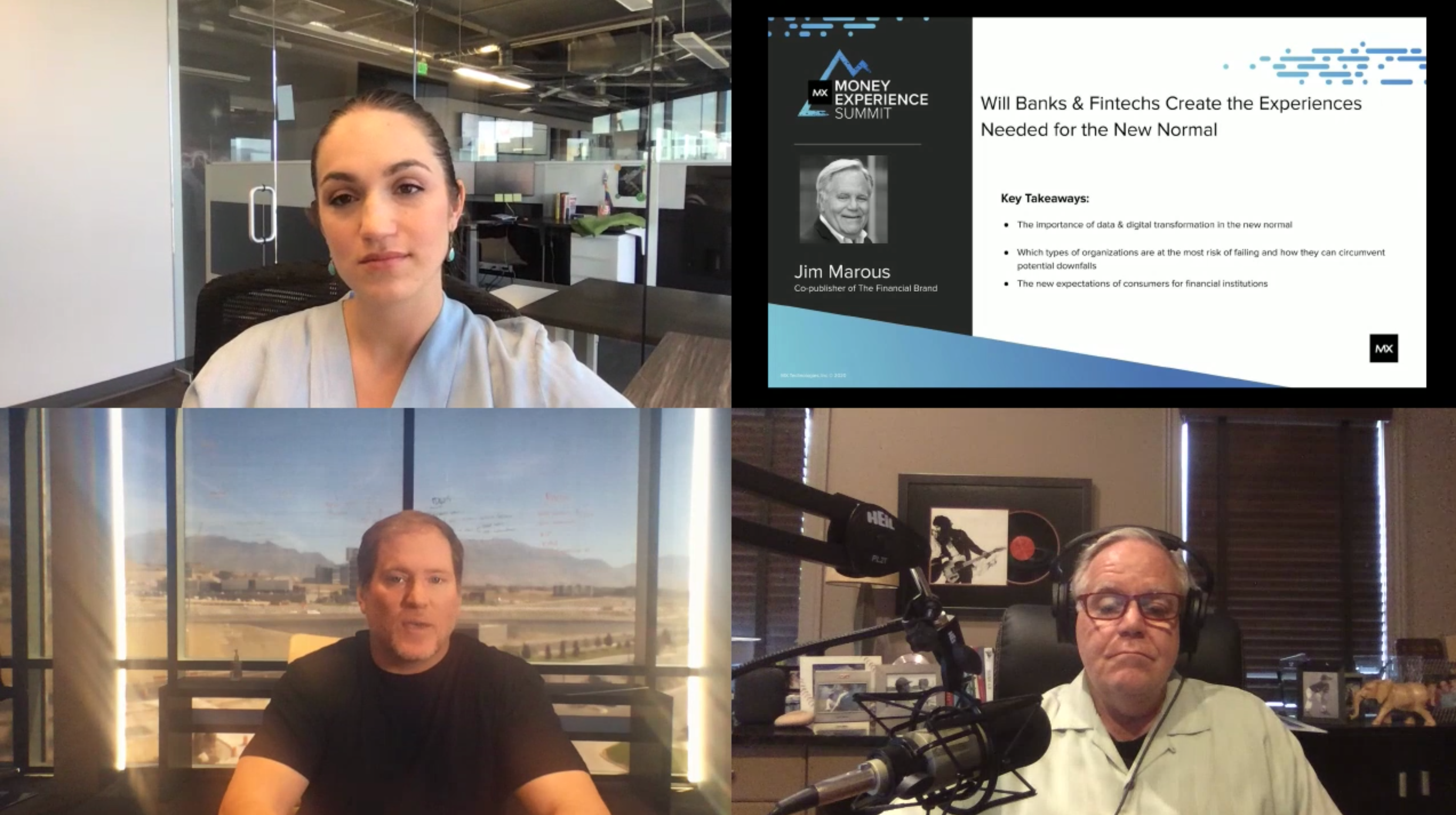 Jim Marous, Co-Publisher at The Financial Brand and Ryan Caldwell, CEO at MX, discuss the importance of data in digital transformation and the new consumer expectations that financial institutions have to meet.

Marous leans on the findings he’s come across in his research, stating, “We're finding that the marketplace in one sense changed dramatically and in other senses, didn't change enough. He gives the example of although some institutions have made online account opening possible, the experience itself is still lacking. He says, “So we have situations where opening an account may still take five to 10 minutes — that's a massive amount of time when you're typing these things in.”

He goes on to discuss the three big takeaways that give us a clue into what the new normal might look like, stating, “One major theme is it's not the technology, it's the culture. In other words, if the organization hasn’t changed their culture out of legacy mode, you're still going to do the things the way you used to do them. Second is that organizations know the problem and how to solve the problem. And lastly, organizations know who they should partner with to solve the problem, but they're not solving the problem. We did our financial state of financial marketing survey, and our research found that 75% of organizations said they're inept at using data to build contextual product recommendations.”

Marous recognizes that consumers expect the type of experiences they have with other digital-first companies from their financial institutions. He says, “The challenge is, are we using the data in a way that's not just informing us internally, but informing the consumer that we know them, understand them and are willing to reward them through better services… in a way that's empathetic and will help them through the day.”

Caldwell echoes Marous’ point. He says, “There's a theme of everyone's just busy. And as people think about automating everything, they can now recover those hours and try to make those hours useful. From a financial perspective, people don't want to have to worry about it. They want to set it and forget it.” He adds, “The more we can use data elements to drive insights and a real understanding of consumers, we can not only delight them from an experience standpoint, but we can automate parts of their lives where they’re saying things like ‘I'm not a financial expert. Can't you take the learnings and find this really cool way to get me into a place of financial strength.’ That’s the expectation that users are going to continue to have, not just in finances, but in every area of their life.”

Marous believes that “the biggest challenge to digital transformation is legacy thinking. I came from the banking world. The people that are in management right now are the same people that were in management, moving up the chain in the organization the last 20 to 30 years. Everyone around them is just like them. There's very few women. And there's very few people that really understand technology as it is today. If you don't let those people into the realm of the legacy of boys club and if you don't have a board of directors that has the technology person on board, it's hard to say ‘we're just going to disrupt ourselves.’”

He goes on to say, “If you think your branches are still important because you have friendly tellers, as opposed to humanized digital engagement tools, you're missing what the consumer really wants. And you will find reinforcement to that idea. People still want to come into the branch for their accounts if you aren't giving them a good option. The challenge is you're never going to see the people that require a digital engagement.”

Caldwell adds, “At the root of the problem is that if you look at all the new industries and the new players that are taking massive market share away from incumbents, they have a common theme of the fact that they reward risk-taking while nevertheless trying to innovate. You have to think about, do you reward well thought out risk taking while trying to innovate. If you don't do it and you stick with this culture of if you make a mistake, the punitive nature is huge, but if you've innovated, the rewards are low then you have to reverse that.”