Millennials Love Big Banks, Even When They Say They Don't

After all, millennials made up more than 60 percent of the Occupy Wall Street protesters in 2011, and they listed all four of the biggest US banks among their top 10 least loved brands.

And yet when it comes to where millennials actually put their money, big banks dominate.

It turns out that millennials are actually the most likely demographic to choose a big bank for financial services — more likely than Gen X or Boomers. In addition, millennials are the group least likely to join a credit union.

Those statistics, which come from two separate studies (one at Digital Fieldwork and one from Ron Shevlin at Aite Group), might initially seem perplexing. How could millennials list the four biggest banks among their most-hated brands and still be most likely to choose those banks for their financial needs?

We see evidence for this over and over.

The app generated an enormous return on investment for Bank of America. To illustrate, from June 2011 to June 2012 more people switched to Bank of America than any other financial institution in the US. 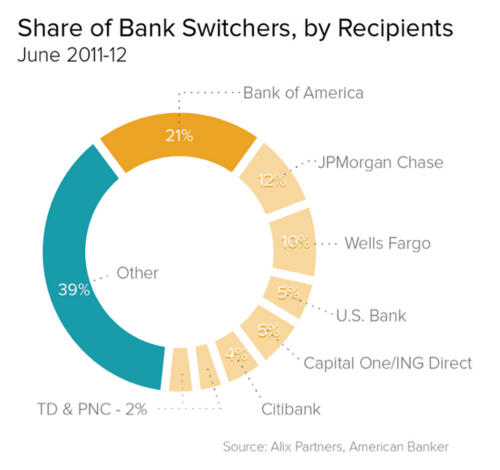 And, to put it bluntly, convenience is king. Just look at these results from Stackpole Report: 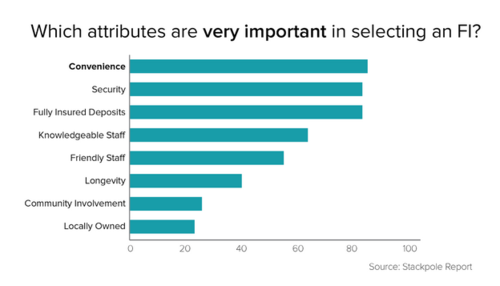 It turns out that millennials generally want to support locally owned businesses, but they want convenience more. It follows, then, that millennials would understandably be more likely to choose big banks because the big banks invest more heavily in the financial technologies that make banking more convenient.

What does this mean for smaller players in the financial industry? It means that it’s more important than ever to figure out ways to compete in the world of fintech. Smaller players likely don’t have the same resources to develop financial technology in-house, but they can find inexpensive partnerships that can give them an edge on the big banks.

If community banks and credit unions don’t move quickly to answer the needs of millennials, then new financial players —like Moven, Walmart, or Google — are set to do so. Not only are these new competitors free of the damaged branding that big banks have, but they're becoming just as convenient as traditional financial institutions. After all, nothing is more convenient than having a full banking experience available on your phone at all times. And that’s what these new players aim to provide.

In sum, the shift in the financial industry cannot be understated. To illustrate, Accenture recently published a number of key statistics:

If smaller players in the financial industry are not fully prepared for the demands for convenience, including the demand for better budgeting software, they should be worried about what the next 10 years will bring — especially since by 2025 millennials will represent as much as 75 percent of the workforce. On the other hand, if you’re making legitimate efforts to make banking more convenient, you have every reason in the world to be excited about the future. Because convenience is king.