As of August 2019, for the 20th consecutive quarter, debt has reached a record high—and is now $1 Trillion above the debt levels at the beginning of the recession in 2008. And the same culprits seem to be primarily at play—both student and auto loans are at an all time high. Furthermore, the “average American Household Debt [is] $5,700. And 41.2% of all households carry some sort of credit card debt.”1 However, it seems that the economy is sending mixed signals. Even though “overall, households have 21% more debt now than they did in the years following the financial crisis. At the same time, credit inquiries for the past six months have dropped.”2 In the fourth quarter, “there were fewer than 145 million “hard” credit pulls” meaning consumers’ request for credit from lenders had drastically declined as compared to the “218 million credit inquiries reported during the first quarter of 2003.”2

What’s more, consumer spending on durable goods fell slightly, housing activity remained soft in June as measured by a decline in the number of existing home sales, new home sales only partly strengthened and single family housing permits and starts were weak. And “quarter-over-quarter loan growth had not been [this] weak since mid-2015. The pace of growth slowed because origination volume declined in several categories, reflecting both softening demand and somewhat stricter underwriting.3

The good news is that unemployment rates are at the lowest level since 1969 and net charge offs reflect that, remaining at historical lows. And because consumers are employed they’re better able to keep up with their loan payments. “Though delinquencies have been ticking up of late, they remain near historic lows in most categories because U.S. employment is strong and household wages are increasing modestly.”3 Additionally, “recent data from the Federal Reserve Bank of St. Louis shows that household income climbed 3.7% between the third quarter of 2017 and the third quarter of 2018.”3

Despite the diligence in paying back debt, “Dan Geller, a behavioral economist at the San Francisco research firm Analyticom, said that while consumers are generally less anxious about money than they were a year or two ago, his data shows that consumer confidence has slipped in recent months. He also pointed to a recent decline in retail sales as evidence that consumers are becoming slightly more skittish about borrowing and spending.”3 The truth is, with borrowers that are overextended, it’s hard to say if rising debt will subside.

How MX Can Help

At MX, we create products and solutions that enable financial institutions to really know their customers, so they can help them make better financial decisions. Really knowing your customers with the right tools and the use of clean data enables you to provide them with the right digital solutions to take control of their finances at every stage of their financial journey. You’ll also be able to provide them with more relevant product offers and programs that make sense for their financial situation despite how the economy might turn. 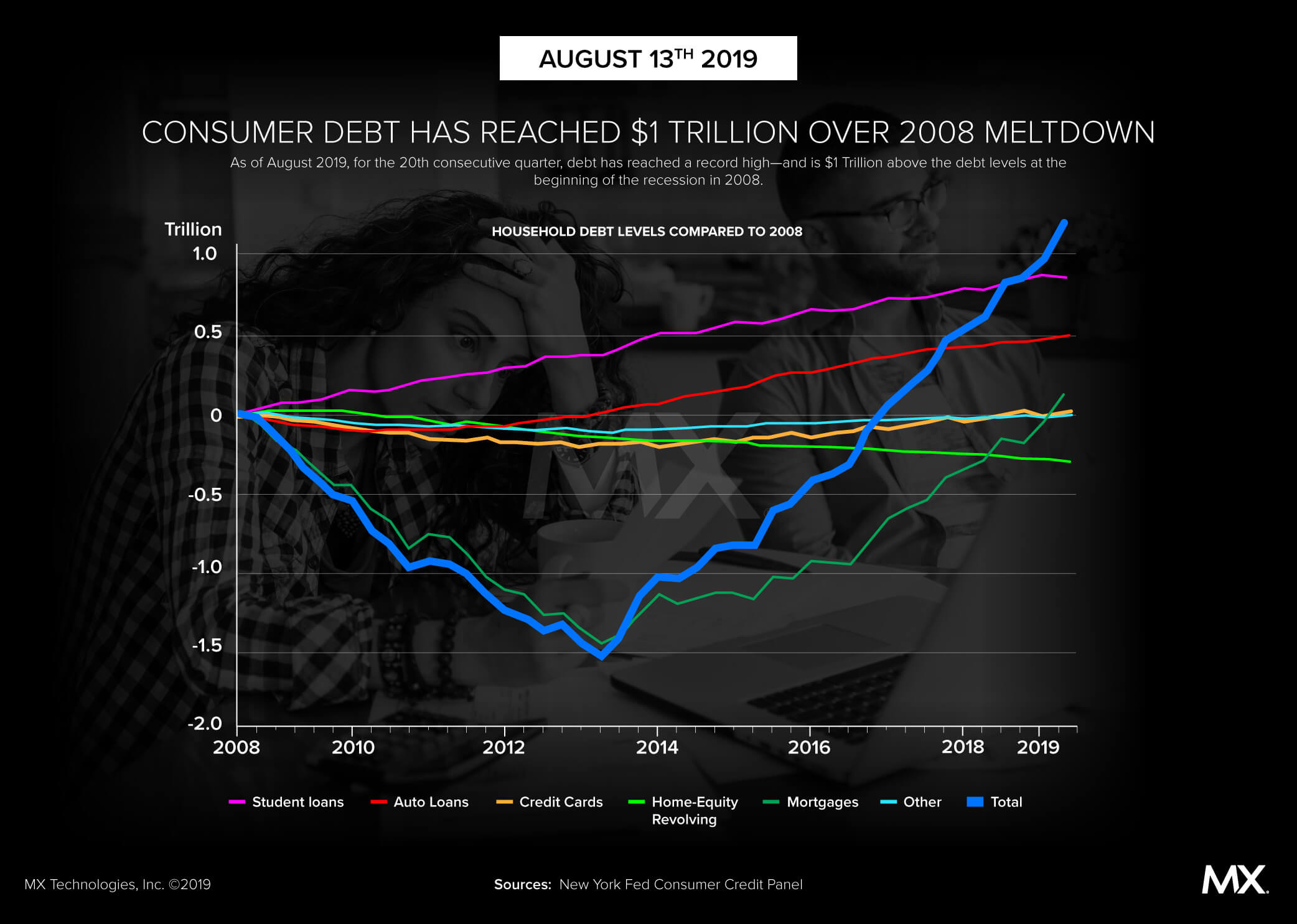