Whitepapers > 50 Years of Technology in Banking

50 Years of Technology in Banking 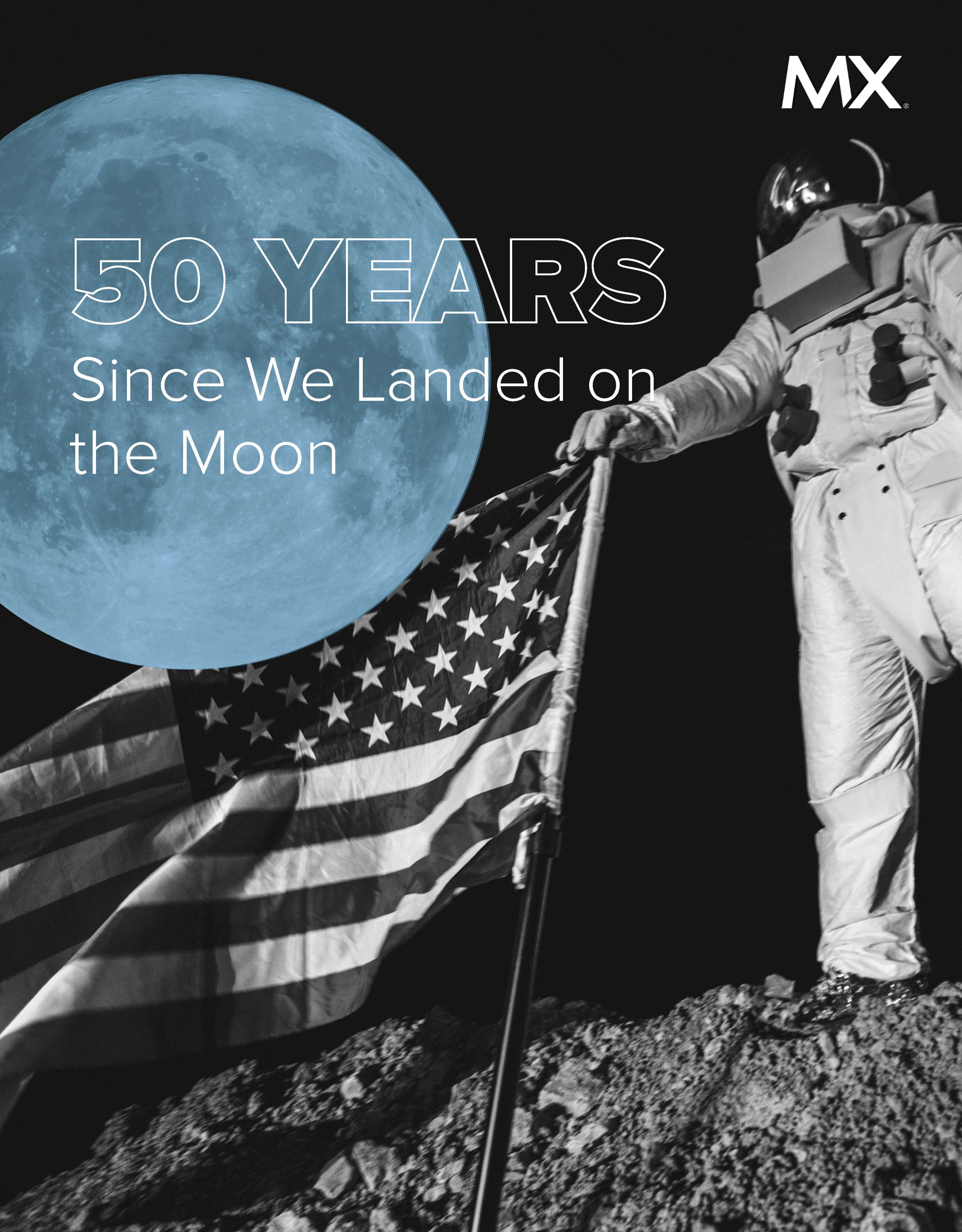 In 1969 surgeons implanted the first artificial heart, Dorothy Hodgkin determined the structure of insulin, the beginning of Bluetooth transmissions was born, and Neil Armstrong landed on the moon. It’s been 50 years since then—50 years of technological advancements and cultural development. And the financial industry is no different. There have been a lot of advancements in the banking sector in the last 50 years or so, thanks to technology. Let’s take a look back through a brief history of banking technology to see just how far we’ve come. 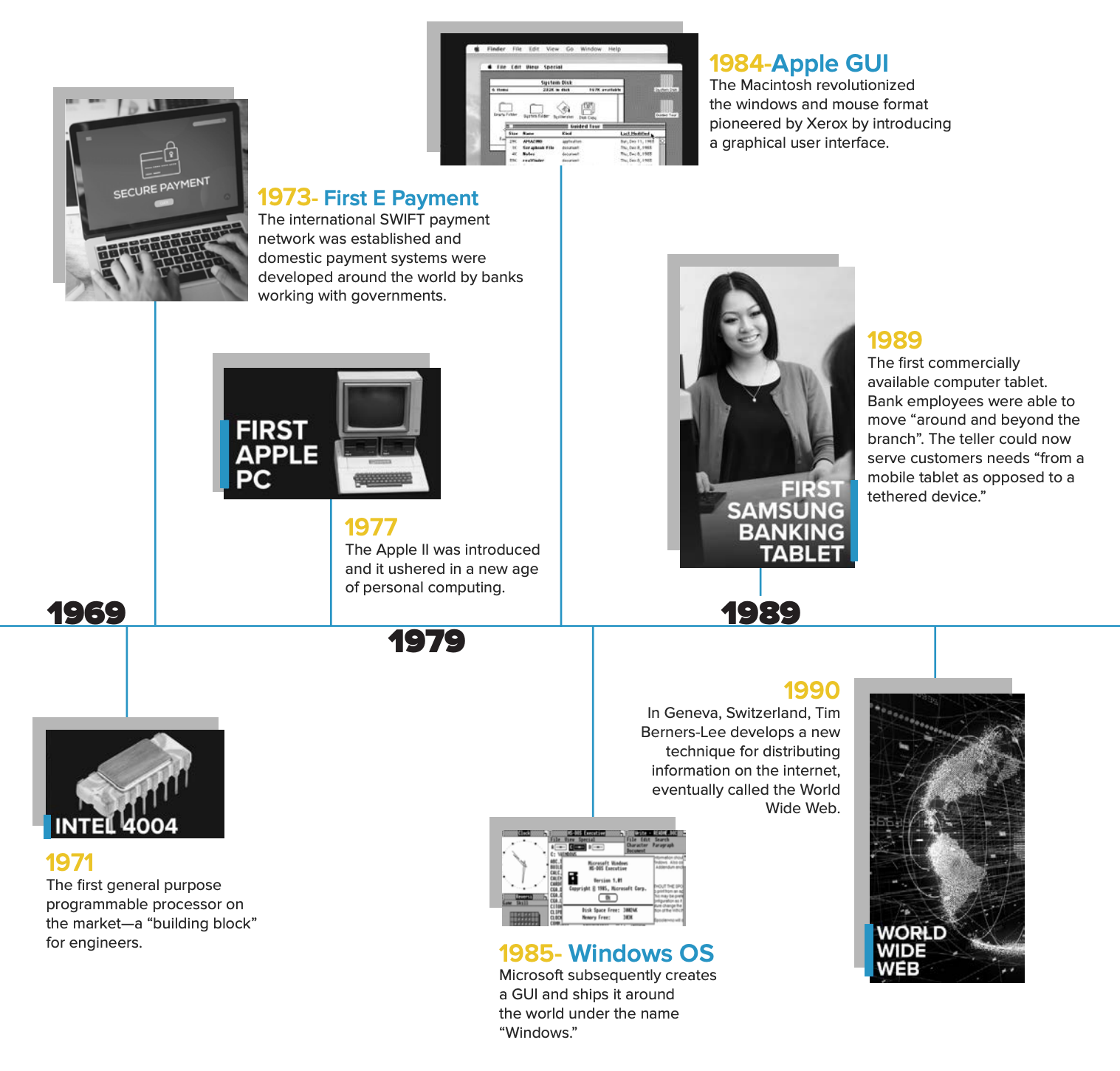 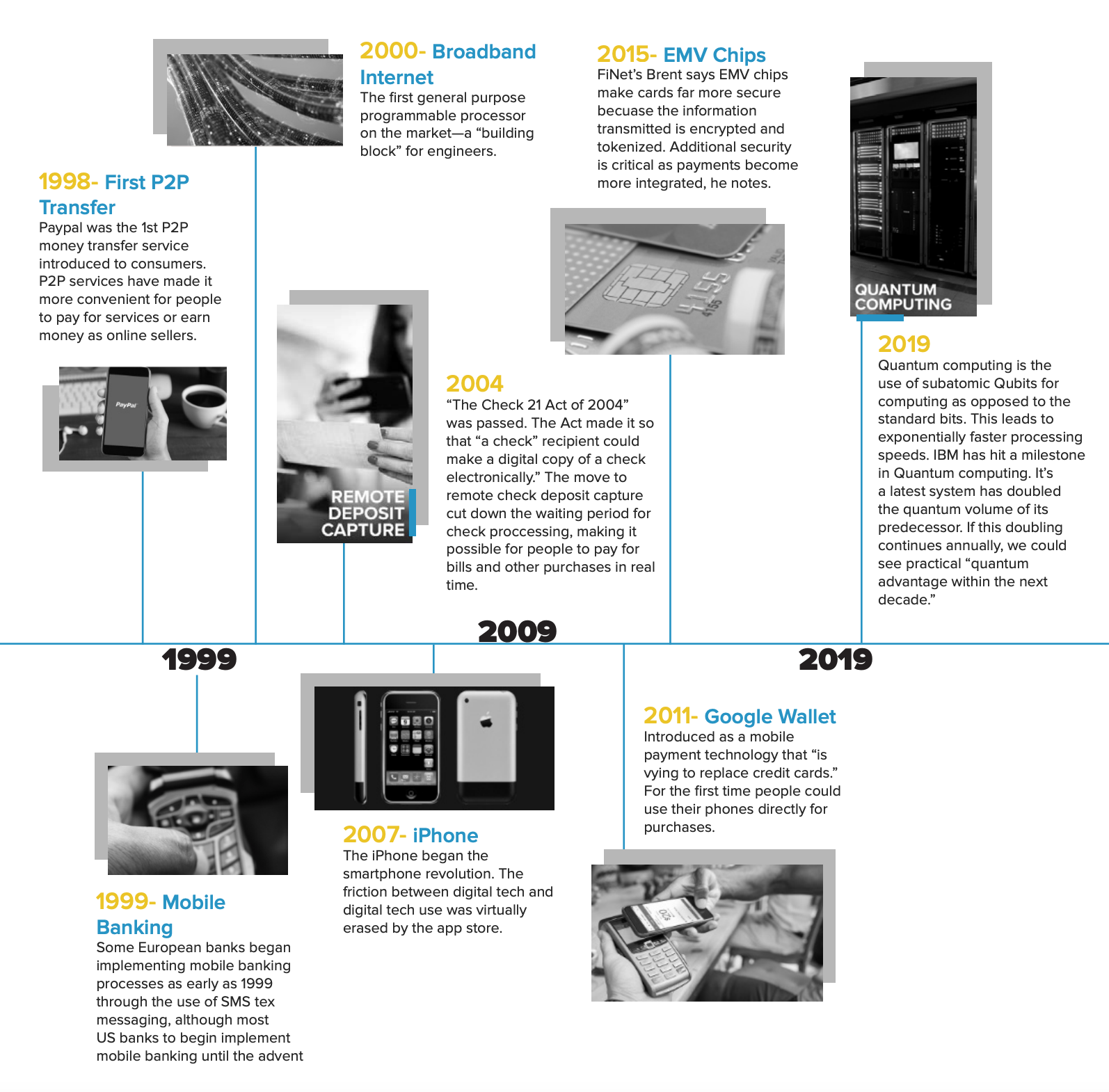 The Introduction of the Credit Card

The first most notable technological advancement in the financial industry was the advent of the credit card in 1950. “Diners Club introduced the first universal credit card, a portable payment solution that could be used at numerous member establishments.”

The introduction of the credit card fundamentally changed how consumers thought about their finances. They no longer had to carry or spend cash for every purchase. They now had the freedom to borrow against a line of credit that they could pay off at a future date. In general, credit cards allow consumers to make bigger purchases, without having to dip too deep into their savings.

ATMs, Computers, and Much More

Fastforward, a little over a decade later to the 1960s, when the world was introduced to the first ATM. “A Scottish inventor named John Shepherd-Barron [thought] if vending machines could dispense chocolate bars, why couldn’t they dispense cash?” Barclays Bank fell in love with the idea and the first ATM was created. With the invention of the ATM, customers were no longer constrained by bank hours and locations when they wanted to access their money.

The use of computers in banking was also introduced in the 1960s when the then-Bank of New South Wales announced it would purchase its first ever computer for the sum of £1 million. That’s about $26 million in today’s dollars.

The use of computers sparked the first digital [banking] revolution.

The computer centrali[zed] the bank’s trading accounts by replacing the machine accounting operations used in each individual branch.” The hope was that a centralized place for accounts would streamline processes and allow financial institutions to place a stronger focus on customer service.

The use of computers sparked the first digital revolution. “Banks started to invest heavily in computer technology to automate manual processing. By the 1970s, the first electronic payment systems for both international and domestic transactions were developed. The international SWIFT payment network was established in 1973, and domestic payment systems were developed around the world by banks working with governments.”

The Convenience of Online Banking

In the 1980s, with digital technology well underway, the “term ‘online’ which referred to the use of a terminal, keyboard and TV to access the banking system using a phone line” gained popularity. With online banking came the benefits of lower transaction costs, easier integration of services, and more targeted marketing capabilities.

As online banking gained momentum, the first commercially available computer tablet, manufactured by Samsung in 1989, brought a new wave of convenience in retail banking. For the first time bank employees were allowed to “move within and even beyond the branch. Instead of waiting in line for the teller to become available, the teller might come to the door, greet a customer, sit on the couch with them and serve their needs from a mobile tablet as opposed to a tethered device.

Late in the 1990s, consumers were introduced to PayPal, a P2P money service, enabling wireless transfers. The creation of PayPal spawned a myriad of like businesses from Venmo and Popmoney to Zelle. These services made it more convenient for people to pay for services wirelessly.

The early 2000s, with the advent of wireless technology and the wide adoption of smartphones, brought the next major shift in the financial industry—mobile banking. Mobile banking made it possible for people to manage their financial lives from virtually anywhere and at any time. Now people could pay bills, check balances, transfer funds, or add new accounts all from their mobile devices. For the first time, the branch experience started to become secondary, as people flocked to the convenience and easy of their mobile devices.

In 2004, as mobile banking continued to grow in popularity, “the Check Clearing for the 21st Century Act” 3 was passed. The Act made it so “a check recipient could make a digital copy of a check and then process that check electronically.” The move to remote check deposit capture reduced the waiting period for check processing, adding convenience and making it possible for people to pay for bills and purchases faster than ever before.

Heading the charge in 2015, “Bank of America... introduced fingerprint authentication and Touch ID,” making it easier and safer for people to log into their mobile banking apps. In the same year, the EMV chip technology became a standard among card issuers. The “EMV chips make cards far more secure because the information transmitted is encrypted and tokenized.” And it adds more security, which is “critical as payments become more integrated.”

A New Era in Banking

Today we’re seeing another major shift in the financial industry, largely brought about by consumers’ expectations for convenience, relevance, and ease. As technology continues to advance in the banking industry, it’s fundamentally changing the banking model. Consumers expect hyper-personalized and relevant communication from all of their online and offline interactions. And they don’t want to initiate the conversation. They want their financial institutions to keep them in the know about their finances and notify them if something needs their attention. In essence, they’re looking for a self-guided financial wellness solution.

And the best part is that financial institutions can do all this without having to fundamentally change their customers’ behavior towards finances. At MX, we’re ushering a new age of personal financial wellness with a tool that does all the heavy lifting—from proactive notifications to guided financial advice, so everyone has access to the financial information they need to lead happier and healthier financial lives.

MoneyMap with Pulse combines the ease and convenience of online and mobile banking with proactive financial advice and insights. Now financial institutions can actively help guide their customers to financial wellness throughout every stage of their financial journey by ensuring they’re always in the know. It’s time to move past reactive, transactional communication to proactive and meaningful relationships that help instill trust in customers’ hearts and minds. Consumers want to know that their financial institution understands them and is actively working to help them improve their financial lives. And now, with MoneyMap with Pulse, you can be there to deliver.

Consumers expect hyper-personalized and relevant communication from all of their online and offline interactions. They want their financial institutions to keep them in the know about their finances and notify them if something needs their attention. In essence, they’re looking for a self-guided financial wellness solution.