Whitepapers > The Mortality of Bank Branches

The Mortality of Bank Branches

The digital age of banking ushered in a world of billions of digital and connected devices. The combination of ATMs, computers, and smartphones has lessened the need for customers to make as many visits to branches. 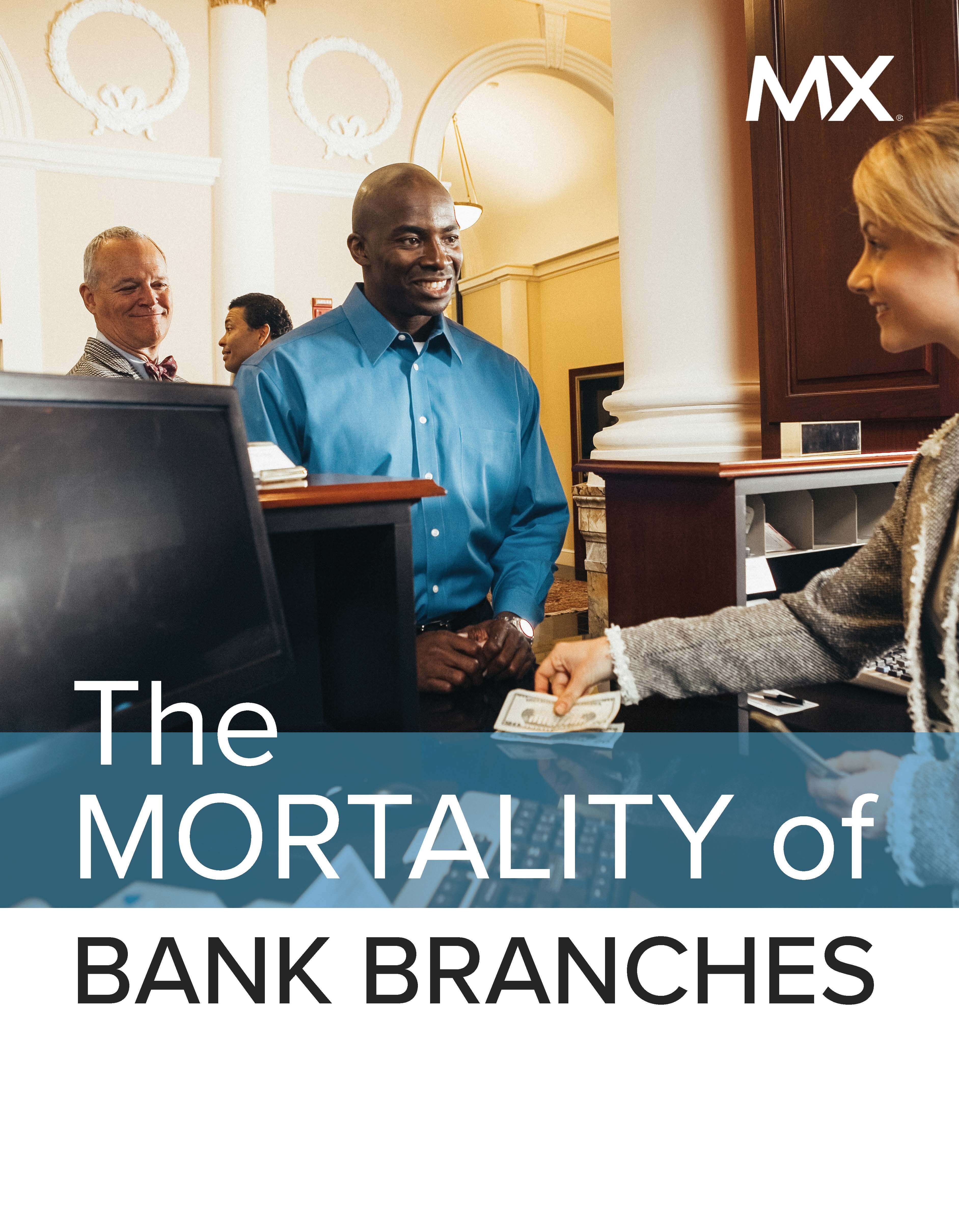 The late Dr. Andy Grove of Intel regularly admonished those of us at Intel “to see the world as it is and not as you would like it to be.” And nowhere is that more appropriate than in the discussion about bank branching. The facts are very clear. Worldwide, there are slightly more than 12 commercial bank branches per 100,000 population.1 However in North America, the European Union and Central Europe & Baltics the number of branches is declining significantly. In 2009 from 30+ branches per 100,000 to about 25 today. The US has witnessed a 9% reduction in branches in the last 8 years while banks in the European Union have declined from 33 per 100,000 to 22. Furthermore, the trendline shows a reduction to 14 within the next 5 years. In the rest of the world, the data shows branching growing but from a much smaller base. e.g. South Asia growing from 7.8 branches to 10.6 over the same period.

Go back 100 years in US banking history and you’ll see a bank and branch environment shaped by regulation. At that time, many states prohibited interstate branching and even imposed widespread unitary banking — one bank, no branches — leading to an abundance of small banks. Deregulation, culminating in Riegle-Neal, 1994, removed the final barriers to intra and interstate branching—ultimately becoming the catalyst for fewer banks with more branches. Trends show that the number of branches per commercial bank growing from 1.2 branches per bank to 17.1 branches per bank in 2017.

The Digital Age of Banking

The digital age of banking ushered in a world of billions of digital and connected devices. The combination of ATMs, computers, and smartphones lessened the need for customers to make as many visits to branches as before. Digital added a new level of convenience, making branches the secondary choice among consumers.

When it comes down to it, branches are expensive, accounting for up to half of operating costs at some banks. The emphasis on cost-cutting following the global financial crisis is certainly reflected in Fig 1 (see infographic), but look closely and you’ll see the decrease in branch staffing belies an even faster decline in branch transactions.

There are many surveys suggesting that users will continue to value branch visits. Really? Even after discounting the surveys from realtors and others with a vested interest in maintaining the brick and mortar status quo, these surveys simply don’t jive with the way many of us live our lives. Many of us have certainly visited bank and credit union branches but not because we wanted to. In a lot of cases, people that still go into the branch, do so because they were having a hard time carrying out the banking task on their digital devices due to poor UX design or error. For example—less than 20% of financial institutions allow a remote deposit for checks > $5000. In addition, many online account openings are so slow and so poor that the consumer either gives up or feels the need to go into the branch.

The digital age of banking ushered in a world of billions of digital and connected devices. The combination of ATMs, computers and smartphones lessened the need for customers to make as many visits to branches as before.

Other commentators point to both JP Morgan Chase and Bank of America who announced plans last year to open new branches. Chase is eyeing as many as 400 new branches in 15 to 20 new markets in the next five years, while Bank of America said it would open more than 500 new branches over the next four years, including an expansion into the major markets of Ohio. However, have those commentators forgotten that under the RiegleNeal Act, no bank holding company can control more than 10% of the total assets on deposit in the United States? That means that unlike most other banks, JPM and BofA are not allowed to acquire banks to grow—so in their case, additional branches in lucrative areas makes sense.

Another trend driven by cost cutting is closing down branches in the less profitable areas and opening new ones in lucrative locations, even if those areas are already rich in competitor branches. Bank of America’s expansion into Denver provides an excellent illustration of this approach. Since the bank opened its first retail branch in Denver in 2014, the bank has managed to snag 2.31% of the market’s deposits with just five branches. By comparison, Chase has 70 branches in Denver and a 10.68% market share, according to FDIC data.

In the UK, Britain’s leading consumer group has called on banks to justify nearly 13,000 bank branch closures that have left millions of people “struggling to access” vital financial services across the country. Figures compiled by the consumer charity Which? show that the UK has lost nearly two-thirds of its bank and building society branches over the past 30 years, from 20,583 in 1988 to 7,586 today. The loss of those sites has left 19% of the population more than nearly two miles away from their nearest branch. An alternative view is that those consumers are just inches away from their online or mobile banking services.

And we’re seeing similar trends to the UK in the US. Although changes in technology have made it easy to conduct some banking transactions from almost anywhere, personal and public benefits are still derived from proximity to a bank branch.

In areas without branches—commonly referred to as “banking deserts”—costs and inconveniences of cashing checks, establishing deposit accounts, obtaining loans and maintaining banking relationships are exacerbated. A banking desert is defined as an area or population more than 10 miles from a branch. 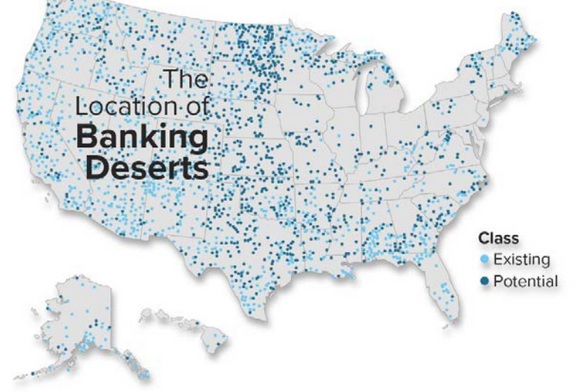 Bottom line, customers expect their financial institutions to know them better than they know themselves in regards to making the right financial decisions—otherwise the engagement often comes across as cold and irrelevant.

The Future of Branches in a Digital-First World

There is no doubt that a branch currently is one of the ingredients in customer satisfaction, but it is far from being the most important one. Even with tens of thousands of branches, the banking industry lags in customer satisfaction—landing at a 14/24 in Net Promoter Score of all industries. Interestingly, the bank with the highest NPS score (78) is USAA with essentially zero branches.

For sure, costs are a significant factor in consumer satisfaction and the cost burden of underutilized branches, while once a competitive advantage for deposit gathering, may well turn into a millstone around the necks of those with vast branch networks unless an alternative way to monetize them appears.

Back in 1985 when Intel was a memory company getting pounded by cheaper Japanese imports, the leadership of Intel asked themselves if we were to start Intel today would we be in the memory business? The answer was a resounding no. And the result was a risky decision to pursue a new opportunity around processors. If Grove was in the banking industry he’d surely admonish banking leaders to look at the data, the trends and the reality to set an appropriate branch strategy.

Although the future of branches is far from clear, financial institutions must adopt a digital-first strategy with a customer-centric mindset. Consumers’ growing demands for digital experiences make it imperative for financial institutions to think beyond traditional branch methods for customer service. At MX, we provide financial institutions with the data, tools and solutions they need to create delightful customer experiences across all their digital channels—including the branch. We’ll help you deliver on all of your customers’ demands—from a 5-star mobile app experience to self-guided financial wellness solutions. Our products and solutions complement your existing strategies, ensuring that you remain competitive and relevant despite the changes in the financial landscape.